Mike: I had a childhood interest in it, like a lot of tattooers in my day. I had a grandfather that had a bunch of tattoos, and I can remember being taken into a tattoo shop when I was a tiny little kid. I watched when a guy tattooed my grandfather; they put me up on a rail so I could see. I fiddled with it a little bit as a teenager on the side. I liked tattooing, but all the tattoos I ever saw were crappy looking. It wasn't until I was in my late 20s that I ran into Tom Devita in New York City. I was working as a magazine photographer, and one day Tom was sitting on a stoop and I saw that he had these stellar tattoos. It was just like a miracle. I said to the guy 'Geez, where did you get those.' You could tell that they were exactly [as the tattooer] intended them to be. It was like lightning to me. So I started hanging out with Tom, just shooting him photographically. He was a super interesting subject to shoot. I just slowly drifted into [tattooing]. When Tom found out I could draw, he had me drawing up designs for customers. While he was tattooing, I would be drawing up a design for the next one. 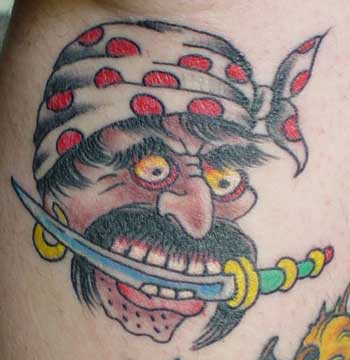